One of my favorite memories of growing up in Laredo, Texas is playing Mexican Bingo, or loteria at my grandmother’s house.

Two of my uncles lived across the street from her and one lived next door to her, so her little neighborhood was all made up of familia.

There were always lots of adults, young adults and kids around to play loteria with. We played into the wee hours of the morning.

This bingo like game is an inexpensive game we used to buy in Mexico when I was a kid.  I’m pleased to see that loteria is available at Amazon today for those of us that miss it.  The Mexican bingo game, known as ‘Loteria‘ is easy to play and oh so addictive.

What’s that?  You don’t know how to play the Mexican bingo game?  Don’t worry…I’ll show you how!

This beloved game is still sold in flea markets and ‘mercados‘ throughout Mexico and a large part of the Southwestern United States.

The Mexican bingo game as it looks today is essentially the very same version that’s been manufactured since 1887 by Don Clemente Jacques, who is widely known as the principal promoter of the game.

There’s something just so nostalgic about looking at the game cards and boards now and knowing they look identical to how they looked when I was a little girl.

The Mexican Bingo game is most often comes as a packaged set of ten boards (game cards), an eighty card playing deck, and a joker, known as “un naipe.” How Do You Play The Mexican Bingo Game?

Loteria is played much like bingo, except we use beans (a tradition started in Mexico) or chips, bottle caps, coins or stones…or whatever you want… as place markers on the game cards, and the name of each playing card is called out during the game.

In Mexican homes as well as in Hispanic homes in the United States, you can still hear the cards being called out: “La Muerte! La Catrina! La Sandia! La Campana!”

The person who calls out the cards is supposed to make up a rhyming riddle about the picture on the card and the other players guess which card the person is talking about.  An example of one of these brain twisters would be “Para el sol y para el agua,” which means ‘For the sun and for the water.’

That example of a riddle would be used to guess what card is being called next. The answer for our example here is: El Paraguas (the umbrella). Anyone with an umbrella image on their game card would place a marker on it, no matter who answered the riddle out loud.

Playing Loteria With Bottle Caps, by issa on Flickr, Commons 2.0

Got Game? Mexican Bingo Game, That Is 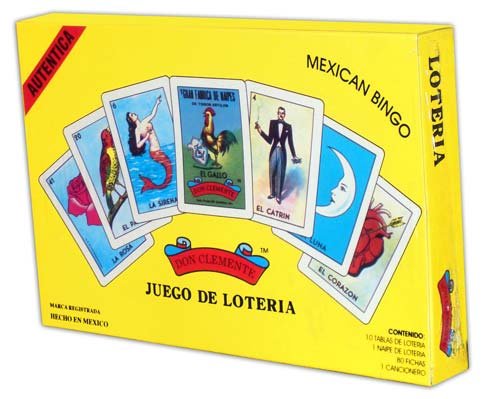 The most common way we can get the Mexican bingo game is on eBay or Amazon these days. Who knew it’s available on Amazon? That was kind of a funny wake up call to me. Hello! Sylvia! It’s the 21st century!

For me, it’s still just a short three hour drive down the highway from here to Mexico. We can pick up some more Mexican bingo games if we need some.

But hey! No worries ~ I’ve got several sets! We’ve got plenty of the game boards and a deck of Mexican bingo cards.  We can use my hubby’s poker chips or some pinto beans!  lol

This game gift box you see here comes with 10 game boards and a deck of cards. Fun for the family! I do hope you try it.

Ways To Win At The Mexican Bingo Game

Before the game starts, the players decide the different ways to win the game.  Think of it like calling what kind of poker game you’re playing.

For example, just as in regular bingo, you can win by marking the images in a horizontal row, OR a vertical column. This is the usual basic way to win.

One of the “extra” ways to win is to be the first player who has the outer four corner images marked on a game card. This option is called “las esquinas,” the corners.

Another way to win the game is to be the first player to mark the inside four squares, called “el cuadro”.

Yet one more way to win in the game is to be the first player to have all of the images covered.

When the cards are filled in the pre-determined manner, the winner shouts “Loteria!” and wins a prize. This prize can be a “pot” of pennies wagered by each player. You have to find your own place markers – and typically people use beans, small stones, bottle caps, coins, buttons – anything that seems handy.

The more experienced the players, the more the above methods are combined for more chances to win. For example, there may be four ‘pots’ going on at the same time where people can wager for the game. I can say I’m ‘putting in’ for corners, inside corners and full card, as well as the row or column that would be required. That’s a lot of chips, buttons or pennies!  And the game can get pretty wild!  I’m in awe of those who can play these multiple games on multiple cards!

The most experienced players will also play multiple cards! My grandmother and my older aunts were CHAMPS at playing multiple cards with multiple ways to win! They were so good, they had their own game cards with their names on the back!

Just A Few Of The Loteria Playing Cards

There are quite a few more loteria cards!

Enjoy These While You Play Loteria

Can’t get enough of loteria? Check out these great gift ideas from eBay and pick something up for your friends and loved ones today.